Social media users have been reacting to a viral video that captured two young women wearing a back sheer dress that displayed their bare breasts at a recently attended party dubbed Narcos All Black in Accra.

The indecent outfit worn by the women has seen famous lawyer, Maurice Ampaw, calling on the security agencies to arrest the two with immediate effect.

In an interview with Ghanaweb, Lawyer Ampaw noted that their action and decision to publish the semi-nude videos was against the laws of the state.

“I think that we have failed as a nation when it comes to this social media impunity that is going on in terms of promoting nudity…we are in a public moral state where we have laws to deal with those issues and if you look at those videos and photos, no one will tell you that they have violated the laws of the land.

“They intentionally went there to expose themselves. They displayed their nudeness and then they published it as well. The security agencies should act now by arresting them,” Lawyer Ampaw added.

The said video has sparked public outrage, with majority of social media users calling out the women for exposing their bodies at a public gathering.

Also, Lawyer Ampaw added, “women advocates should be worried because it is a disgrace to womanhood and we need to take an action. Their actions and conduct is a shame to womanhood. We need to take legal action by arresting them.”

Meanwhile, Rwanda authorities in August arrested a 24-year-old woman, Liliane Mugabekazi, who wore what has been described as “shameful clothing” to a musical concert by French singer Tayc.

She will face 2 years imprisonment if found guilty of public indecency. 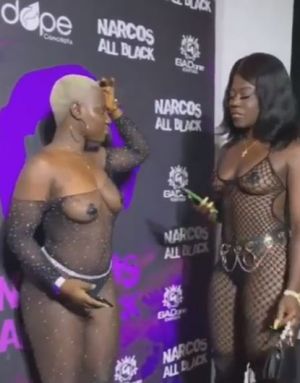