Popular blogger Nkonkonsa, known in private life as Eugene Osafo-Nkansah, has proudly celebrated his wife on their 2nd wedding anniversary.

This comes days after facing public ridicule for allegedly cheating on the actress with Abena Korkor.

In a lengthy post on Instagram Friday, June 11, 2021, Nkonkonsa touted his wife and mother-of-one as a “virtuous woman” who came into his life and changed so many things about him.

While describing Abena Korkor’s recent outburst as the “biggest public shame ever” in his life, Nkonkonsa indicated that Victoria Lebene has found the courage to stand by him, in the midst of all the brouhaha.

“I stand here today to celebrate a virtuous woman for changing me and every perception surrounding me. What a time to celebrate a wedding anniversary,” his lengthy post said in part.

He continued: “I’m facing the biggest public shame ever in my life, But in the midst of the shame, the public ridicule, the insults, the trolls and the judgements, there’s only one woman who has found the courage to stand by me and doing everything as a wife.

“Please remember my wife in your prayers because she needs it now more than ever. Happy anniversary Victoria, I love you and I always will.”

“From Eugene Osafo-Nkansah to my wife, Mrs. Victoria Osafo.”

Addressing the allegations, Nkonkonsa said he is “ashamed and disappointed in himself” for subjecting his wife to insults, the trolls and public ridicule.

Days ago, Abena Korkor came on social media where she mentioned the name of some popular figures in the country who have tasted her ‘honey pot’.

She mentioned Nkonkonsa, Lexis Bill, Kojo Yankah, and others as some of the people she has had an affair with.

Days later, she secretly sent an apology to all the people she mentioned their names explaining that she suffered a relapse and that was why she came on to make such comments.

During the Entertainment review show, Nkonkonsa was being mocked by the host and panelist on the show for being a good licker as claimed by Abena Korkor.

Nkonkonsa bought out the apology he received from Abena Korkor to sort of proving he is innocent of all the allegations leveled against him.

Things backfired as Abena Korkor got pissed and decided to leak her chats with Nkonkonsa where the blogger is seen begging to come over and do justice to her punani. 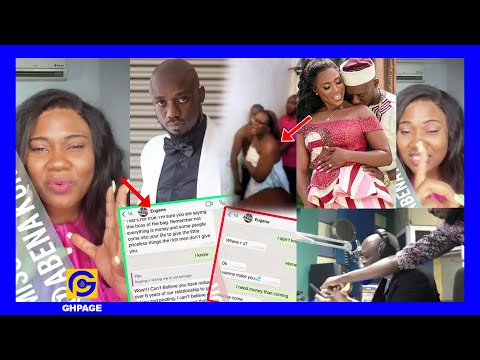 Victoria Lebene is, however, yet to officially respond to all the allegations and her husband’s emotional plea.